At university there was talk about direct planting into stubble after wheat crops, saving fuel, time, reducing soil compaction and reducing the number of annual weed seeds, being brought up to the surface where they germinate.  Permaculturists never dig the soil and neither does Charles Dowding.

I completed a Permaculture Design course about 10 years ago and the reason for not digging made sense to me for the reasons mentioned already but also because in nature everything has its own niche.  The soil flora and fauna have their own niches within the soil profile – where they each have their own jobs to do – if we start turning the soil over then we destroy the micro habitats of this invisible but crucial world and also make hard work for ourselves.

The action of digging temporarily breaks up the ramifying mycorrhizal strands in the soil profile as well as exposing bacteria that live in the dark to damaging UV light.  It is not irreversible damage of course but it is worth pondering on this before reaching for the spade.  There is growing awareness about the importance soil has to play in sustaining life on earth (for example in a recent BBC broadcast  http://www.bbc.co.uk/programmes/b04xrwhc) and did you know this year is the Food and Agriculture Organisation’s International Year of Soils.  Growing without digging – give it a go!

Here is a summary of last night’s meeting with Charles Dowding:

No dig gardening is a fine way of taking the back ache out of gardening and reducing the number of annual weeds in your garden however you will need to tackle the perennial weeds.

The key is to suppress light from the surface of the soil until the weeds die, bearing in mind that different weeds take different amounts of time to die, for example: dandelion about 4 months, buttercup about 3 months, couch grass 9 months and field bindweed about 10 years! Old black plastic is good for excluding light in the early stages of clearing ground / killing weeds, but you can use ‘landscape fabric, cardboard and biodegradeable membrane (which doesn’t exclude enough light on its own) – experiment with what you have. Note: cardboard with mulch ontop – the cardboard rots too fast and couch grass grows up through.

Loosen and lift out regularly any weeds that come back (i.e. those perennial weeds)

When growing vegetables make beds approximately 4 feet apart, paths are 15-18inches wide.  A raised bed can be made using timber then placing a layer of cardboard over the ground then fill bed with well rotted organic matter (18 months old). Use cardboard on the paths and cover with sawdust (or other organic matter) (cardboard alone will break up under your weight)

By not digging annual weed seeds are not brought to the surface to germinate. Only 2 hoeings a year will be necessary, the first hoeing is usually at the end of winter

Top up each bed with well rotted organic matter every winter (ideally in December) to keep the surface looking clean, to allow the weather to start breaking down the organic matter, to encourage worms to take it down too and to create a dark brown bed which will warm up quickly in spring.

Do not dig woodchip nor sawdust into the soil, leave it ontop

It is probably better to crop intensively a small area rather than less intensively a larger area (saves time and effort), therefore after onions plant your second crop (e.g. endive for autumn), after early potatoes plant carrots, leek, salads, celeriac or cucumber.

Space salad plants generously, pick outer leaves of salads only, each plant will crop for 10 weeks, you will only have to do 2 repeat sowings (+1 for the winter) instead of 4 (+1). Towards the end of the 10 weeks underplant with rocket, endive, white mustard…

Charles does not harden off plants but plants plug raised seedlings directly outside then covers them with horticultural fleece.

Have a ready supply of seedlings in the green house growing in plugs ready for planting out. Charles only sows carrots and parsnips directly into the ground

Don’t start sowing too early. “If you sow carrots now (February) then you won’t have to eat carrots”

Salads for the winter in a polytunnel – sow September, plant out in polytunnel October

You can bend the rules a bit, for example sow sprouts in May, plant out in July after salads…

Sow Florence fennel in June so it doesn’t bolt

Runner beans – you can let them go to seed, harvest the dry seeds and store dry, soak prior to cooking…

Tomatoes – remove all foliage up to first truss. Tip the plants on 10th August. Underplant with salads

Use horticultural fleece or Enviromesh on leeks against leek moth

Horticultural fleece, Enviromesh or bird netting on vegetables against rabbits, pigeons and deer

www.charlesdowding.co.uk A website worth checking regularly as it is full of tips and informations 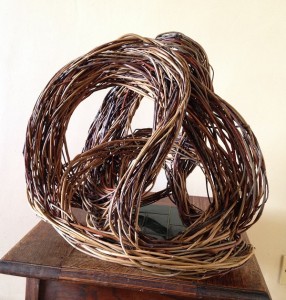